Light Up The Sky | Will Munro’s Army of Lovers
Light Up The Sky is a creative design and marketing agency that helps clients bring bright ideas to life with intimate design experiences.
design, marketing, illustration, Toronto, Light Up the Sky
15722
single,single-post,postid-15722,single-format-standard,ajax_leftright,page_not_loaded,,qode-theme-ver-5.4,wpb-js-composer js-comp-ver-4.3.4,vc_responsive

Will Munro’s Army of Lovers

25 Jun Will Munro’s Army of Lovers

Launch of the Queer Quotable artwork series.
By: Suzy Malik

Will Munro did many amazing things in his lifetime. He was an artist, a historian, a punk, a business owner, a DJ and a party promoter. Though he was most known for turning underwear into art and for turning a bunch of seemingly disparate queers into a body politic. There is a tree planted for him in Trinity Bellwoods park, the plaque reads, “An army of lovers will never be defeated.”

When I think about Will Munro’s army of lovers I see flashes of the queers (myself included) that found a new kind of pride at the infamous Vazaleen parties. I see us all glistening with sweat, dancing with eyes closed and mischief curling up the corners of our lips. A sea of misfit toys covered in tattoos, paint and sparkles who found comfort in each other, and found power in the kind of movements that created community.

I consider myself lucky. Lucky to have been a part of those days, at those events, hearing and seeing those bands. Lucky to have been in a scene that was all about art and activism and love. It was an inspiring time. There were parties and paintings and protests and an energy that was palpable. It was a time when I felt a tiny part of something much bigger than myself.

Will was like a north star. His parties welcomed people home. Though we were just acquaintances, I carry a strong fondness for him. This was not uncommon. He had that kind of energy. It was easy to be drawn to him.

As I mentioned in my post about illustrating Cleve Jones, Pride is a time of contemplation for me. I think back on the queers who have come before me, carved out safe spaces and those who surrounded me and inspired me, challenged me and kept me thinking, dancing, laughing and making art.

I’ve never been a fan of parades. I’m not so good with large crowds, but I’m no Pride curmudgeon. I find my own way to celebrate Pride every year. Despite the fact that there is still lots of work to be done around the world (and in our own backyard), there is also a lot to celebrate.

Before Jonathan and I started Light Up The Sky I was quietly working on a series of illustrated quotes, and we’ve both committed to keeping this project growing. These pieces combine drawn portraits and words that will likely resonate with LGBTQ folks. It’s a small way for us to honour and celebrate those who have inspired both Jonathan and I. The series is called Queer Quotables, and we’re going to start rolling them out during pride week as our way of saying Happy Pride.

I personally wanted to start with this quote about magic from Will Munro, in part because he is somebody I always think of around this time of year, but also because I think we could all use a little bit of Munro magic. I’m hoping it can also remind us that there is something magical about coming together and truly celebrating each other.

So here is the first official piece from our Queer Quotable series honouring Will Munro, Happy World Pride everybody! 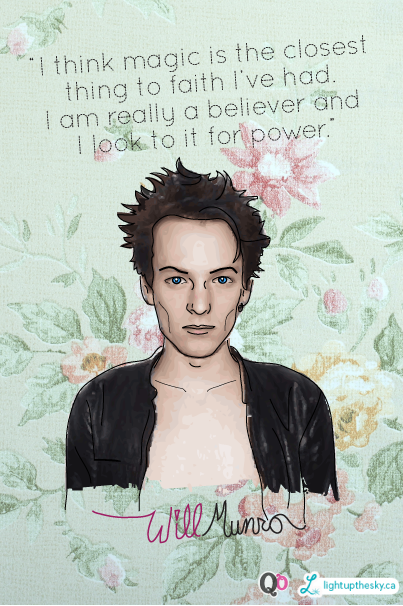 If you don’t know who Will Munro is or don’t know too much about him, go ahead, give him a google and take it all in. For those of you who want to know more, I highly encourage you to pick up Sarah Liss’ book Army of Lovers for a collective re-telling of his history.